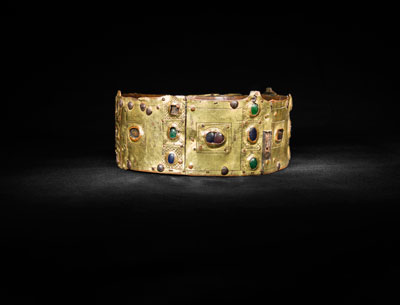 The crown of Saint Erik

A king’s crown which in all probability is the funeral crown of St Erik. It is made of mercury-gilded copper with red, blue and green glass stones, and it may have been made for the burial of St Erik in 1160.

The Crown of St Erik is made of copper. The outside of the crown circlet is mercury-gilded and has a simple engraved pattern and red, blue and green glass stones. The top has eight small protuberances, every second one of which is believed to have been four tall spires shaped into lilies or crosses. Small cavities on the inside can be construed as attachments for a lost fabric cap. These signs suggest that we are dealing with a funeral crown. Moreover, less work has been done to the back, suggesting that the crown was only meant to be seen from in front.

This crown was probably made for the funeral of St Erik in 1160. Research has among other things uncovered two similar crowns from the same period, one in Germany and one in Poland. St Erik was probably translated from his first burial place at Östra (East) Aros, present-day Uppsala, during the second half of the 12th century. Another possibility is that the crown was made for this translation. 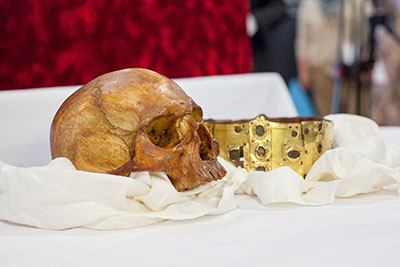 Together with the bones of St Erik, the crown was probably looked on as one of his relics. This could also account for the worn state of the crown, in that it would then probably have been shown to pilgrims and touched by them during the great feasts of St Erik and on other red-letter days.

This is the oldest surviving regal crown in Sweden and the Nordic countries.